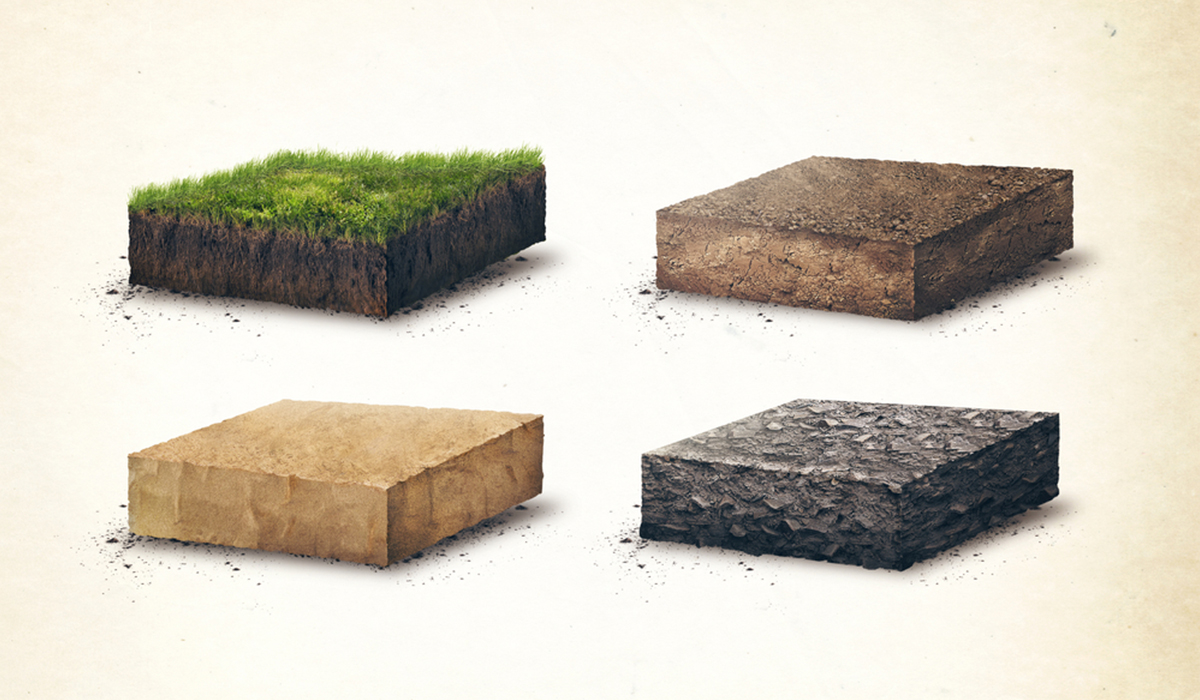 Before beginning any development on a plot of land, even grading, it is important to study and to have detailed knowledge of the land’s subsurface soil conditions. The study would include establishing boring location control points and facilitating important decisions regarding grading and site preparation of the land. This may include creating retaining walls or even considering preliminary remediation changes in support of the structural design. The survey report will majorly convey three important things to the nature of the land and its site development – the topography and site slope, the permeability and/or drainage of the land, and the nature of the soil upon which structures and ancillary facilities will be constructed.

Slope and distance Survey
The initial study of a plot of land begins with evaluating the slope of the land, its stability, and establishing various control points in support of the civil/structural/architectural designs.

Rise Over Run: The slope of the land is defined as a ratio of the change in vertical elevation (Rise) versus horizontal distance (Run) of the land and is often expressed in percentage or a ratio (e.g. 1V:2H). This is a very simple technique where a person starts from the bottom of a slope and walks upward towards the top in a positive slope or in the reverse case, in a negative slope. The ratio of the elevation gained or lost to that of the horizontal distance between the starting and ending point gives the slope angle percentage or ratio.

Slope Stability Analysis: Any kind of construction that involves building on a slope or excavating into a hillside, like hilly roads or creating a purposeful change in elevation of soil like a highway or railway embankments, runs the risk of a slope slide.

Slides occur when the slopes are not adequately stable due to the weak shear strength of soil at the bottom of the slope or where slopes are too steep to be supported by the underlying soils. Slope stability analysis is the study of how strong the slope is from a site localized perspective.

Triangulation: Triangulation surveying has been the surveying method applicable even before the GPS came. This is an economic method to surveying in undulating plains and hills where it is easier to establish visible stations.

The concept is to define the area as a network of triangles. The first side and angles of the initial triangle are measured and then the other two sides are calculated mathematically. The two sides again serve as the base of the next two triangles.
The downside of this method is there can be surveying measurement errors creeping into the surveying accuracy if the sides are not accurately determined.

Trilateration: Trilateration is the cheaper alternative to triangulation. Here, the length of one of the sides of a triangle is first measured called the baseline then the distance from each of these points to the third point is measured using an electron distance measurement device. The angle is trigonometrically derived from the sides.

The invention of a distance measurement device has made trilateration the most popular and economical method among surveyors.

Permeability test
The permeability of soil is important in civil engineering. It provides the rate of how fast or slow water flows through the soil and helps prepare better site designs and soil improvement plans as needed. Soils which are not permeable, and which may become inundated, can turn to marshland where construction may not be possible or overly expensive to develop. The study of permeability can be divided into several factors.

Surface Infiltration Rate: This is an important factor to understand how fast rainfall and ponding of water on the site dries up. Surface infiltration rate is the rate of absorbing running water by the soil occurs. It is the rate is usually faster in granular soils and slower in silts and clay soils.

Saturated Hydraulic Conductivity: Apart from the above, this is another factor indicating good drainage of the soil. This factor comes to play once the soil is already saturated by water. This is a measure of the tendency of the soil to allow water to flow internally away from the source. There are two methods of analyzing this.
Particle Size Analysis: This is a preferred method for unstructured sand or sandy, loamy soils.
Permeability Class Test: Fine-grained soils like clay are tested for saturated hydraulic conductivity in this method.

Soil Nature Study
Apart from the study of the landform and permeability of the in-situ soil strata, there are also interacting strength properties of the soil grains which go a long way to creating a successful effect on the construction. Soil strength also needs to be taken into consideration when creating the final design.

Shear Strength: Shear strength of a soil is a very important design factor in civil/geotechnical and structural engineering for any given site. Using soil shear strengths, the bearing capacity of the foundation and stability of retaining walls and slopes can be evaluated for design purposes. Field or laboratory direct shear strength determinations are tests of how the soil responds to applied shear forces. The tests can measure the bonding and interlocking between the soil particles. The laboratory direct shear test is a common lab test where a shear load is applied on a relatively undisturbed soil contained in a standardized shear box. Alternatively, cohesive soil samples can be prepared and tested in a triaxial chamber to determine shear capacity values of cohesion and internal soil friction angle values.

The test procedure involves creating a borehole and placing a split spoon sampler in the hole. The SPT sampling spoon is then driven 18-inches into the ground using a 140-lb steel weight falling a distance of 30-inches. The number of hammer blows required to drive the spoon each 6-inches is recorded and the sum of the last 12 of driving is recorded as the SPT-N blow count value. The simplicity and standardization of this field test make it very economical and popular within the industry. This test also provides additional information related to the density/compactness of granular soil strata and produces disturbed soil samples for further laboratory classification testing.

Compaction Test: As the name suggests this is a laboratory test of how compact the soil becomes when subject to a pre-determined and applied compaction energy in the laboratory. Compact soils have more soil particles and fewer air voids in between the soil particles. Compacted soils thus have more soil to soil particle interaction and corresponding higher shear strengths and are less compressible. This gives an engineering strength advantage to supporting heavily loaded structures like roadway pavements, dams, embankments, and runways.

Compaction testing is done using either Standard or Modified Proctor’s test procedures. The results provide a compaction curve relationship between water content and the dry density of the soil under compaction. The peak of the compaction curve is defined as the Maximum Compaction Dry Density at its Optimum Moisture content.

Specific Gravity: This is the ratio of the density of soil to that of water on a unit volume basis. The test is important in calculating the density, void ratio, and degree of saturation of the soil. Specific gravity determinations give an understanding of the density of soil structure below the crust. Some of the test methods for specific gravity are Density bottle method, Pycnometer method, Gas jar method, Shrinkage limit method, Measuring flask method.

Conclusion
Once the testing is done, it is now important to plan the type of foundation needed to be created to support structures in the site-specific soil types. Some of the heavily loaded structures may need to go with pile foundation or drilled shafts while others may be built on large spread footings or mat foundation which may in turn be supported by piling etc.